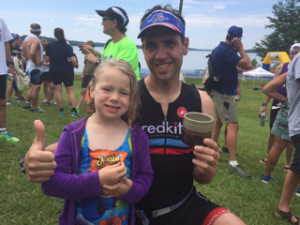 What is your triathlete/swimming history?

I am an adult onset swimmer and could not swim a length of a pool until my mid-thirties. I am still a pretty terrible swimmer, though I have made big strides since coming under Ashley’s tutelage when we moved to Nashville in 2015. In terms of triathlons, I have been racing since 2002 and did my 100th triathlon in Miami last November. I had a good day and was lucky enough to qualify for Team USA; as a result, I will be racing Long Course Triathlon Worlds in Denmark in July and Long Course Duathlon Worlds in Switzerland in September, both for Team USA. I have done 9 Ironmans including Kona and over twenty half Ironmans including 70.3 Worlds, but I have focused on short course racing since moving to Tennessee. Before I was married and we had our daughter, I raced all over the world including Germany, Brazil and Canada. Now I focus mostly on local races here in Tennessee.

Tell me about your family and your life outside the pool?

I am an attorney and recently stepped down as Acting United States Attorney here in Nashville to take a position with HCA as Vice President for Litigation.  My wife is an amazing, award-winning documentary filmmaker.

Her latest movie, Dark Money just premiered at the Sundance Film Festival last week and she was awarded the prestigious Producer’s Award for her work in documentary film, which was very cool.  Her previous movie, E-Team, was nominated for an Emmy and is on Netflix.  She also recently won the award for best screenplay at the Nashville Film Festival. Our daughter Josie is 5 is also a born storyteller. I have no doubt she will also be winning awards very soon.

I understand you survived a devastating accident? What happened and how has it changed your life?

A little over a decade ago, I got hit by a truck while riding my bike and fractured my pelvis.  While I came back from the injury (raced a triathlon 10 weeks later) it was too much too soon and I developed some really bad movement patterns that resulted in a ton of injuries. The wreck took me from doing Ironmans in the 10-hour range to doing them in the 12-13 hour range. After the crash, I was always dealing with some injury.  I went through several years of seeing many, many, many therapists with no real improvement. But then we moved to Nashville and Ashley introduced me to Chris Wolfe, who I can say with some experience, is THE best physical therapist in the world. I am still not back to what I was, but last year I raced in 13 triathlons, won my age group or better in six of them, finished second in four others and qualified for Team USA for duathlon at the Long Course Duathlon Nationals (my swimming is perfect for duathlons) and for triathlon at the Long Course Triathlon Nationals. Any success I have had is directly attributable to Chris. I would strongly recommend his services to any NAC member dealing with injury, trying to develop better movement patterns or just trying to get better at their sport.

Ashley is the reason I joined NAC. She is an amazing coach because she can relate to and motivate swimmers with an extremely wide range of interests and goals. Her enthusiasm and positive energy is contagious. She is also able to devote individual attention to thirty swimmers and their strokes in one practice, which is a very impressive skill of multitasking.

What’s your favorite part of the day?

My favorite part of my day is hanging out with my wife and daughter at the end of the day. I start my day with a bike, run or swim before the family gets up as it sets my head right for the day to come.

What kind of impression do you hope to leave with people?

Enthusiasm and high energy are key ingredients to a happy life. Like most people, I think, I want to devote my energies to making the world and my community a better place for my daughter to grow up in.

How Parents Can Handle Their Swimmer’s Failures and Mistakes Gallery

How Parents Can Handle Their Swimmer’s Failures and Mistakes

The Culture of Comparison Gallery

The Culture of Comparison