Who is your role model?

My biggest swimming role model is Melanie Margalis. We have been racing each other for a few years now, and she has always been so supportive of me, despite that we are competitors. When I made the team, she was one of the first people who gave me a hug which meant a lot to me given that I have learned a lot from her in and out of the pool. I have always admired how Mel carries herself; she is incredibly humble and gracious. In every interview, it is always so evident that she swims purely because she loves the sport, which I respect tremendously. 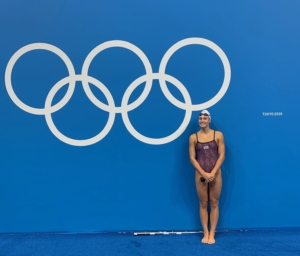 What was the coolest thing about being on the US Olympic team?

The coolest part about being at the Olympics was getting to see the emotional post-race reactions from the swimmers and their teammates and coaches. One of my favorite memories was seeing Bobby Finke win gold and then his Florida teammates and coach start crying… I started crying too! Coming home, it has been really awesome to show my family and friends my medal and share with them the stories that I have experienced this summer. It is always really funny to me to hand someone the medal and see them realize how heavy it is! For me, showing it to people has helped me reflect on the magnitude of my accomplishment and made me very grateful for such a crazy summer.

How did you feel before the IM?  What was the ready room like?

I was very nervous before all three of my IMs in Tokyo. However, by the time I was warming up for the final, I had reached this point where I was so tired of being nervous that I just wanted to be excited. For TV purposes, we have to be in the ready room 20 minutes before our race, so being in there for so long gets nerve-wracking as the suspense builds. I remember when I walked out for the final and I had this moment of clarity where I knew exactly what I had to do to have my best swim possible, so that made me confident as I stood on the blocks before the start.

How did you feel when you finished the IM?

The first thing I felt when I finished that IM was a huge wave of relief. For me, one of the hardest parts about competing in Tokyo was dealing with the pressure I was putting on myself. Before I even saw the scoreboard, I knew I had given every ounce of effort that was possible into that swim, so I was already proud of myself and just relieved that all the pressure was over. When I saw that I had won silver and my USA and UVA teammate Kate Douglass had won bronze, I was so happy for the both of us. It was an amazing moment for team USA and my university.

What was it like being on the medal podium?

I think I just smiled the entire time while I was on the podium. When me and Kate’s names were announced, team USA in the stands went nuts, so that was really funny and heartwarming. Getting to see the two American flags rise was also a very special moment.

If you had the floor, who would you want to thank?

I would thank my mom, dad, sister, Doug, John, and my UVA coaches. The two seasons leading up to the Games were extremely mentally and physically challenging, and these people helped me remain focused and confident when I doubted myself. My family was always there for me after a disappointing practice or race when I struggled to believe in myself, and my coaches were constantly reminding me of the end goal and the baby steps to get there when I was lost. Being at NAC for 6 years, Doug and John really have turned me into the athlete that I am today. They showed me the sacrifice and work ethic needed to be one of the best swimmers in the world. They have gotten me to the elite level of swimming, but most importantly, they did not give it to me. Instead, they showed me how to work for it and earn it, which is something I am forever grateful for.
By admin|2021-08-26T13:29:59-05:00August 26th, 2021|Competitive Team, NAC Alumni, Non-Competitive Teams, Parent Education, Support Staff, Team Sponsors, Uncategorized|0 Comments